In this study, Cu-10% vol. TiC nanocomposites were ball milled and spark plasma sintered for 5 min at 600, 700 and 800 °C under pressure of 50 MPa to produce bulk materials with relative densities of (94.6-96.5) %. Two cop- per powders with average particle diameters of 75 µm and 40 nm were used as matrix materials and nano-sized TiC particles with an average size of (40-60) nm as reinforcement. Phase composition of sintered samples shows only characteristic patterns of Cu and TiC. With increasing sintering temperature, the hardness of the nano-com- posites increases. Composites obtained using the nano-sized copper powder showed higher Vickers hardness than those using the micron-sized copper powder at all sintering temperatures. The highest hardness values of nano- composites using micro- and nano-sized Cu sintered at 800 °C are 188 and 249 Hv, respectively. TEM and SEM images revealed that TiC was uniformly distributed in the Cu matrix in both nano-composites.

Cu and Cu-based alloys are used for various applications, such as bushes, bearings, and elec- trical sliding contacts due to their high electrical and thermal conductivity, good corrosion resis- tance and high melting point [1-11]. Addition of ceramic reinforcements such as SiC, Al2O3, TiC, B4C, and ZrO2 to metal matrix improves hardness and thermal shock resistance compared with pure metals. Titanium carbide, because of its high mod- ulus, hardness and melting temperature, and mod- erate electrical conductivity is an attractive com- pound for use as a reinforcing phase in metal matrix matrices [8, 12].

Mechanical and electrical properties of these composites depend on the nature, size and distribution of the reinforcing particles as well as on the interaction between the matrix and reinforced phases. For maintaining high electrical conductivi- ty, reinforcements that are thermodynamically sta- ble in copper should be selected to avoid contam- ination of the copper matrix with dissolved ele- ments. One of the most commonly used methods to fabricate particle-reinforced metal matrix com- posites is powder metallurgy [7, 8, 10]. Many stud- ies have been conducted to determine the effect of the size and distribution of the ceramic reinforce- ment on the properties of the composites, exam- ples of which can be found in [13-15].

The present work deals with copper matrix composites reinforced with titanium carbide TiC particles.  Spark  Plasma  Sintering  (SPS)  was selected as a consolidation method for the as- milled composite powders. This technique has gained a reputation of the versatile method of fast sintering of powder materials [16-18]. For conduc- tive materials, the electric current passing through the particle assemblies can cause local melting of the material in the inter-particle contact regions, as was demonstrated for SPS of Ti3SiC2-Cu particle agglomerates obtained by mechanical milling [19].

The goal of this work was to study the character- istics of the nano- and mirco-sized copper powders and sintering temperature effecting on sintering behavior, the microstructural features and hardness of the sintered Cu-TiC composites obtained by mechanical milling and Spark Plasma Sintering.

0.5 wt.% steric acid as process control agent, were milled in a planetary ball mill, P100 Korea, to pro- duce composite powders and distribute nanopati- cles of TiC in the copper matrix. Milling was per- formed under an atmosphere of argon at 400 rpm for

515 for 5 min, with a heating rate of 50 K/min, under a pressure of 50 MPa in vacuum chamber. A graphite die and graphite punches were used.

The density of sintered samples was measured by Archimedes method using electronic densimeter SD-120L. The microhardness measurements were performed using a Vickers hardness instrument Mitutoyo MVK-H1 under a load of 100 gf. Each sam- ple was measured five times and an average value was obtained. 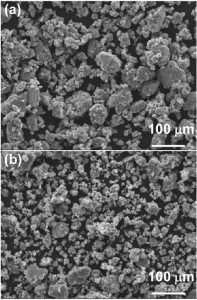 Fig. 1 shows the morphology of the as-milled Comp. MN (a) and Comp. NN (b) containing 10 vol.% of nano-sized TiC. An average size (10÷100 µm) of particle agglomerates of Comp. MN is larger than that of Comp. NN (10÷60 µm), indirectly pointing to a different mechanical behavior of the nano-sized cop- per particles during milling-induced deformation. 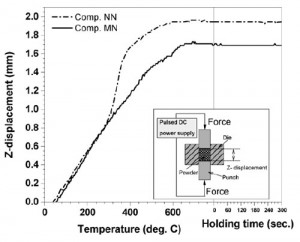 Fig. 2 shows the curves of changing in Z-dis- placement of two nano-composites sintered at 800°C. It can be seen that the shrinkage of Comp. MN increases linearly to 700 °C and keeps constant at higher temperature upto 800 °C. While for Comp. NN the shrinkage increases linearly from room tem- perature to 300 °C and rises fast to 400 °C, then increases slowly to 600 °C and keeps flat to 800 °C. At holding stage, there is a little change in sample shrinkage in both composites. The reason for the difference behavior in shrinkage between two nano- composites can be the rearrangement of the powder particles caused by following processes at the boundary of adjacent powder particles during sinter- ing under pressure: local melting and/or softening, and interdiffusion. In the case of Comp. NN sintered at above 300 °C the more intersive local softening will be probable due to nano-sized Cu matrix. The similar change in shrinkage of Comp. MN is observed for Cu-25 wt. % nano-sized TiC by Oanh et. al. [5].

Fig. 3 illustrates the XRD patterns of nano-com- posites sintered at temperature 800 °C. Both XRD results show only diffraction peaks of Cu and TiC. Furthermore, XRD graphics obviously show that no new phases in composites can be detected, includ- ing oxide. 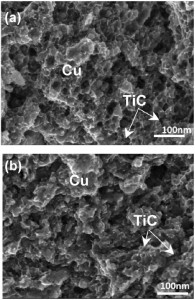 The fracture surfaces of the composites sintered at 800 °C are shown in Fig. 4. The composites show a uniform morphology, low residual porosity and the absence of any macroscopic defects. The distribu- tion of titanium carbide particles in the copper matrix in both nano-composites is homogeneous. The sin- tered nano-composites fractured in a ductile mode that is similar to the TiC-Cu nano-composites by SPS [9]. 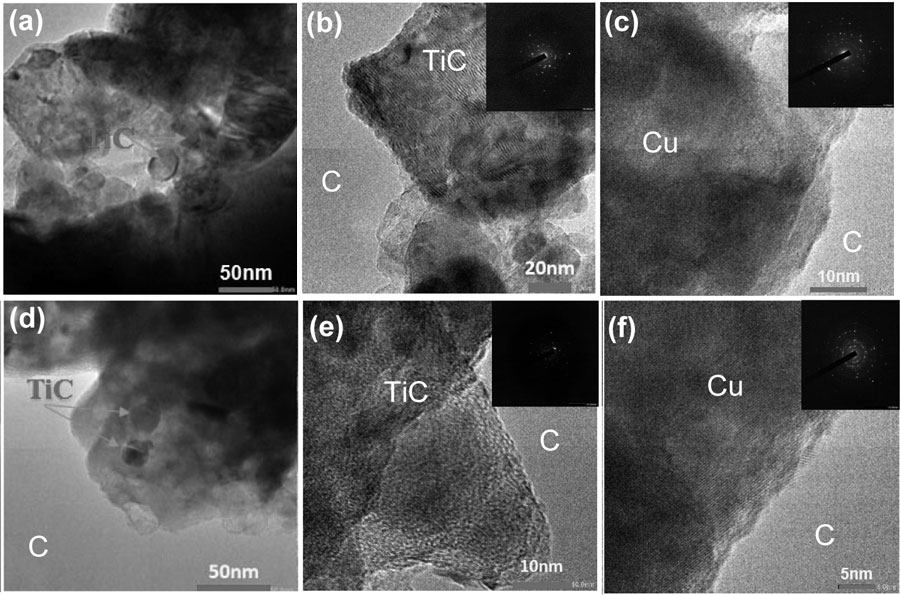 Fig. 5 demonstrates the results of the HR-TEM analysis of Comp. MN and Comp. NN. Only diffrac- tion spots belonging to the Cu and TiC phases were found in the selected-area electron diffraction (SAED) patterns of both nano-composites. Fig. 5a and 5d show TiC particle morphology in both com- posites. TiC-rich zone with SAED of TiC phase was visible in Fig. 5b and 5e. Fig. 5c and 5f show the Cu- rich zone with SAED belonging to Cu phase.

In this study, Cu-10% vol. TiC nano-composites were prepared by ball milling and Spark Plasma Sintering using a TiC nano-powder with an average size of (40-60) nm and two kinds of copper powders with average particle sizes of 75 µm and 40 nm. The TEM microstructure and XRD data confirmed only phases of Cu and TiC, no new phase formed in both bulk nano-composite samples. The compacts were obtained by Spark Plasma Sintering in (600-800) °C and had relative densities of (94.6-96.5) %. The hardness of the composites was investigated depending on the sintering temperature and copper particle size. Composites obtained using the 40-nm copper powder showed higher hardness than those from the 75-µm copper powder for all sintering tem- peratures. The highest hardness values of nano-composites using micro- and nano-sized Cu sin- tered at 800 °C are 188 and 249 Hv, respectively.

This  research  was  funded  by  the  Vietnam National Foundation for Science and Technology Development (NAFOSTED), grant number 103.02-2011.49.